What are HOT ROCKS when Metal Detecting? 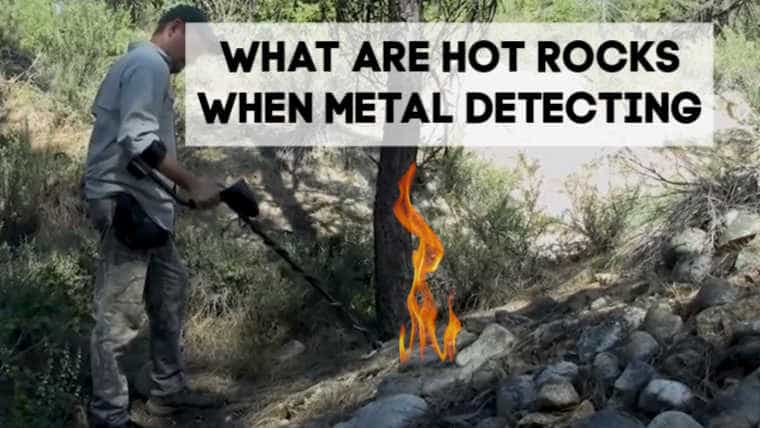 I was looking for old coins on the shore of a local river back when I first got into metal detecting and I kept getting false hits even though I was using discrimination. I couldn’t figure it out, which especially bugged me because

I usually have great luck with rivers. I went back to that river last week, now with much more experience, and immediately realized the problem… HOT ROCKS! To help you not make the same mistakes I did, I have put together some tips and tricks for identifying and dealing with Hot Rocks when Metal Detecting.

What Are These “Hot Rocks” That Detectorists Keep Talking About?

Hot Rocks (sometimes known as “Cold Rocks”) are rocks, pebbles, or sediment, which contain higher or lower amounts of conductive or nonconductive minerals relative to the ground around them. Specifically, related to what your metal detector is manually or automatically ground balanced.

Negative Hot Rocks are very nonconductive as they contain (usually) high concentrations of Magnetite. Magnetite is an Iron Oxide (Fe3O4 to be exact) and will often cause the rock or sediment which it is in to become dark black in color. Additionally, it will cause the rock or sediment to become heavy due to the high atomic weigh of the Iron Oxide Molecule. One of the most common ways to encounter this type of Hot Rock in North America is “Black Sand”. This is just as it sounds, sand which is dark, or black, in color, and abundant in Magnetite.

Magnetite, however, can be used for more than just disrupting your metal detectors ground balancing systems. In places where Magnetite is common, it is also not uncommon for the soil to also be gold-bearing. This is especially noticeable in streams and dry-washes of gold-bearing regions due to the Magnetite being collected into a more concentrated area.

Tips for Identifying and Dealing with Negative Hot Rock Interference

Negative Hot Rocks, at shallow depths, will exhibit a false-metallic audio response. This false-metallic audio response of the metal detector will sound less definite and more general than responses from “real” targets. This is often accompanied by a delayed acquisition and then nulling of the audio response when you move your coil away from the area and back to the target location. Some other characteristics of the Negative Hot Rock audio response are: the response being unrepeatable or only repeatable when swinging the coil one direction, the signal being completely unable to be pinpointed, and in cases where the metal detector will display a signal on a screen these signals will not be present on that devices screen.

If you are using Manual Ground Balancing then, besides hearing these false-metallic audio signals, you will also have a lower detection depth in highly non-conductive sediments. One way to fix this issue is by using the Non-Silent Search type accompanied with the All-Metal discrimination mode, then re-balancing your metal detector. You will notice a lowering of the Threshold tuning level before re-balancing which is an indication of this process needing to be done.

If there are large inconsistencies in the nonconductive Hot Rocks or Negative Hot Rocks at deeper depths then the Threshold tuning level may become completely null. In this case, when using All-Metal discrimination, nothing can be done to mitigate the effect on the metal detector. Instead, in this case you will need to readjust the Manual Ground Balancing until a small increase in the audio threshold is noticeable when lowering the coil to the ground. This an adjustment which is known as “Positive Offset” to the Ground Balance. This helps your metal detector compensate for any sudden decreases which could be caused by the inconsistencies or deeper signals.

If you happen to be using Silent-Search, you will not notice any change in performance unless you stumble upon a large Negative Hot Rock at a shallow or medium depth level. In this case your metal detector will exhibit the previously described false-metallic audio signal which can be ignored once you feel competent in recognizing the signal.

To reduce these false-metallic audio, or non-audio, responses the best thing to do is to use the discrimination features on your metal detector to eliminate ferrous responses. This, of course is only available on Very Low Frequency metal detectors. Furthermore, using these discrimination features may have an effect on your coil’s sensitivity or responses to metallic objects which exhibit a false-ferrous metallic signal. In the case that you are using a Pulse Induction metal detector, Hot Rocks of any kind (besides non-Graphitic Positive Hot Rocks) will not affect your metal detectors efficiency / responses.

Positive Hot Rocks are very conductive as they contain (Usually) high concentrations of Maghemite. Maghemite is an Iron Oxide (Fe2O3 to be exact) and will often cause the rock or sediment which it is in to become red, reddish-orange, or yellow color. Although, Maghemite is an Iron Oxide, just like Magnetite, it exhibits lower ferrimagnetic properties (aka higher ferromagnetic properties) than Magnetite.

However, it is also possible that Positive Hot Rocks are very conductive because they contain high amounts of sulfide minerals. These minerals are Pyrrhotite (aka Magnetic Pyrite Fe(1-x)S (x = 0 through 0.2)) and Bornite (aka Peacock ore, CuFeS4). Pyrrhotite will be the same color as Maghemite but Bornite will be a copper-red or brown color unless it has been tarnished. In which case, it will turn to a range of blue and purple shades.

While these are the most common Iron-Bearing Positive Hot Rocks, these is a tricky subsection of non-Iron-Bearing positive Hot Rocks. These can be any rock or sediment material which has high concentrations of copper ore, bauxite (aluminum), manganese, gold, nickel, or commonly graphite. Graphite is a highly conductive Carbon-based substance which you may know from the fact that most pencil leads are now made of the Graphite substance.

Tips for Identifying and Dealing with Positive Hot Rock Interference

The non-Iron-Bearing forms of Positive Hot Rocks which are not Graphite, due to their distinct metallic properties, are difficult to deal with when it comes to ground balancing, although some tips will be given later in this article. When it comes to the Graphitic Positive Hot Rocks, however, there is a simple solution to dealing with its interference on your metal detector.

Read this article about setting the sensitivity on your metal detector. How to Set the Sensitivity on a Metal Detector

As I mentioned, the signals from the non-Graphitic Positive Hot Rocks have their own distinct signal because they are all metals which could be found in thing which would be considered “real” targets. This makes them the most difficult type of Hot Rock to deal with by far, and also means that in some cases there is no other way to deal with them than to dig them up and find out for yourself. In areas where these types of Hot Rocks are abundant, this has been known to be a serious problem.

I have never experienced this, although I have been told they may be more common than you would think. There are some ways which very experienced detectors have claimed to be able to discern between these Hot Rocks and “real” targets although they take years of constant practice to theoretically be learned. I say theoretically because there is no proof that these methods are actually efficient at making a certain distinction.

Tips for Eliminating the Effects of Mineral Salts when Metal Detecting

Along with Positive Hot Rocks, high levels of mineral salts can cause sediment to have a higher conductivity than would be expected. This is because various mineral salts can exhibit conductive properties which produce false-magnetic signals from your metal detector.

The most common place to find these mineral salts is on the beaches of the ocean as they have been concentrated by the evaporation of ocean water. Also, because this is one of the most common places where metal detectorists will go for metal detecting (if they live near an ocean) so the statistic is somewhat skewed, but is effectively useful for determining some “best practices” when you know you may encounter these mineral salts.