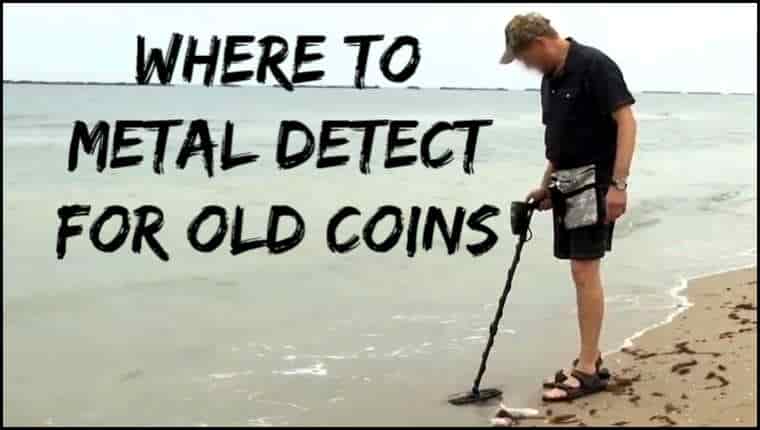 When I first got into metal detecting I didn’t realize how quickly I would run out of places where I could look for finds (mostly old coins because that is what interests me). After I extensively searched my yard, my local beach, and even my parent’s yard, I didn’t know where else I could go. Since then, I’ve done a lot of metal detecting, and not just in my yard, so I’ve compiled a list of places which I have found to be the best places to look for old coins.

1.Parks – Every Town has a Park

In general parks are the most accessible location to metal detect, simply because they can be found in or around almost any town in the United States. Many of these parks, whether state or county owned, exhibit large swaths of open land along with historical preservations such as monuments or buildings. I love to go to parks for this reason, because I almost never run out of places to look before I eventually decide to go home.

I have found plenty of old coins and other relics which patrons of these parks have been losing for decades. Moreover, getting a permit to access the park is relatively cheap and lets me go to any state park I want to as many times as I want to for the entire year. The only downside about metal detecting in parks is that the laws which govern whether or not metal detecting is allowed vary widely from park to park.

It is always a good idea to check with the state laws for your state, and then oftentimes even to check with the park manager to obtain permission before you go looking around. I haven’t had many problems with this, most parks I have been to allow it, however even with permission it is extremely important to always practice good metal detector etiquette when on land you don’t own. The actions you take when metal detecting on public land can have an effect on whether or not a park will allow people to use that park for metal detecting in the future.

National forests are much like state parks, except they are minimally developed for public use and as a result of this have a significantly lower number of visitors. I personally like them because of this, but it does mean that there are fewer old coins or other objects which you will most likely find. Because there are less visitors, and those visitors aren’t focused in any areas in particular, it is more of a gamble in terms of where to metal detect.

I wrote even more about Metal Detecting on public land particularly BLM and National Forests in this article: Can I Metal Detect on BLM Land?

One major advantage of National Parks (and other Bureau of Land Management Lands) is that there is no need to get permission or a permit of any kind to metal detect there. Collecting rocks, minerals, or other small artifacts is almost always allowed with only a few exceptions which relate to historical preservations. I haven’t had any problems at National Forests, in fact they are usually the least stressful places to metal detect, but if you are worried about the rules of one in your area you can usually find information on its website.

One downside of National forests that I have experienced, besides the relatively lower chance of finding something, is the terrain of much of the forest. In addition to countless trees and bushes, there are also leaves and other natural debris which cover the forest floor. However, every once in a while, you can find trials, paths, or openings, and these are my favorite places to try finding something. You never know what you’re going to find, or if you are going to find anything at all, but National Forests are some of the calmest and most untouched areas where someone could metal detect.

It is a common occurrence to see someone metal detecting at almost any public beach, and for good reason. I recommend for anyone who wants to try and metal detect in new places to look for a public beach in their area. Beaches are a huge location for people to concentrate especially in the summer. Moreover, I enjoy the fact that it is always easy to dig in the sand and even easier to backfill the holes you create by simply pushing the sand back into the whole. Sometimes the sand will even try to fall back into the whole while you are digging, although that in particular can be frustrating at times.

When looking for old coins, beaches might not come to mind because it is likely that if any old coins were at the beach they most likely have already been found by the countless numbers of people who have searched for them before you. And, this can be true of some beaches where patronage is very high and management of the sand is carried out on a consistent basis.

If the sand is being raked on a weekly or daily basis then most object will either be removed or heavily damaged by this process. This is why I try to find beaches which are not heavily trafficked or maintained. These are more common than you would think and can often be recognized by a large amount of debris in or near the sand and also a large amount of seaweed in the water adjacent to the beach.

Saltwater beaches can be a particularly fun place to metal detect as you get to see the ocean as you search. For me, I frequent the beaches of the Great Lakes for this same reason. People drop tons of stuff at the beach mostly due to the fact that they often don’t have pockets on their bathing suits / summer attire.

However, people also love to litter on beaches, in particular aluminum cans and bottle caps. I always just do my best to use discrimination on my metal detector, when I can, and not get overly hopeful when digging up a hit.

Both the banks of rivers and the riverbed itself can be great places to metal detect, especially if the river is shallow enough that you can comfortably dig without getting too deep in the water. Rivers are a place where many people visit, but also, they carry things down the river through their currents. Because of this, you never know what type of thing you can find on account of the fact that it could come from anywhere along the river.

Most river access will either be on private land, in which case you only need to make sure that you have the permission of the landowner to metal detect there, or on state owned land, in which case you should make sure that it is legal for you to be metal detecting in that specific river at the location you plan to be searching at. I do this by calling the main office of whatever state park or county park the area is located in.

Read all about metal detecting in Rivers and Streams in this Article:

When I metal detect in the river, as opposed to just on the banks, I always make sure to have a metal detector which is waterproof as well as to wear waders when I am in the water. Digging in the water can be tricky, so I always try to dig very slowly and carefully. Moreover, I only search in shallow water where I can see the riverbed I am digging in.

Some churches, depending on who owns them and what kind of church they are, will let you metal detect on their land if you get permission beforehand. They might only giver permission for some area and not others, or for some times and not others, and in general it is just very important to be respectful and mindful of the land you are on when you are metal detecting.

I think the reason why I have always had luck with church land, in particular with finding old coins, is that people gather in these locations at least once a week and have been for generations. Of course, this is only true of older churches, but sometimes even newer churches will be built on land which had an older church on it previously. In general location which have previously had a building on them which was formerly highly trafficked, but which now is demolished and relatively abandoned, is a good place for metal detecting. In particular in finding old coins due to their heritage.

Tips for Looking for Old Coins

On Very Low Frequency Metal Detectors, there are often discrimination features which either can help you look for the specific metals which coins are made of or which will specifically have a mode called ‘coins’ which does the same but in a simple way.

This helps me most on the beach and in areas where construction has happened due to it helping me weed out bottle caps, nails, pop tabs, and other waste materials. Read more about Discrimination in this article: What is Discrimination Metal Detecting and How to Set it

While you are searching in any of the areas listed above, or anywhere in general, I always like to try and look near places where I know people would most likely congregate. Furthermore, in the areas where people congregate, I like to look in the areas where people would most likely be using or moving their belongings. Anytime people are moving around their stuff is an opportunity for them to lose something, and often this can be coins or small things which could be easily overlooked.

If you are looking for old coins in particular, you’re going to need to find a place where people who could have owned these coins could have lost them. Of course, this could be anywhere in the world, but some places can be proven to have been frequented by people who lived in the time when these coins were in circulation. This means looking for the year when a park, or beach, or church was founded / created. In the United States this is a particularly important consideration given the relatively short time that it has been a country. And, an even shorter time that many of its land holdings have been a part of the union.

Unless you own the land, it is possible that it is illegal for you to metal detect on that land. Moreover, even if you are allowed there may be limits or regulations which govern your access and utilization of the land. Because of this, it is extremely important to always be as thorough as possible when doing research for a location.

Gaining permission from a landowner, a park manager, a church owner, or government (via laws) should always be the first step. The punishment for metal detecting on restricted land can vary all of the way from being asked to leave the location to being shot at if you are on private land in a state with a stand your ground law in effect.

It is one thing if you dig up a hundred locations, leaving piles of dirt at each one, in your own backyard. Is a completely different thing to do this on private land which you have been given access to or public land which you are visiting. If you want to continue to be allowed to metal detect in an area, you should always do your best to not disturb the land which you are searching on.

Check Out These Spots for your Next Metal Detecting Trip