How to Set the Discrimination on a Metal Detector 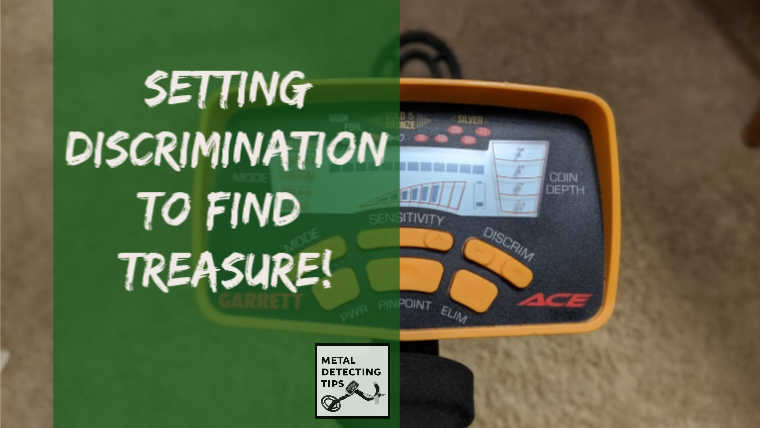 I used to be scared to use discrimination on my metal detector because I didn’t want to risk losing something valuable even if it meant I would get more time-wasting hits. But, after finding countless pull tabs, and nothing particularly valuable, I’ve realized I might have been wrong.

What does Metal Detector Discrimination Mean?

Metal detector discrimination or DISC is a feature, commonplace among relatively newer metal detectors, by which certain metals can be ignored as to avoid common but low value objects. Modern DISC will often start with leaving out any signals received from iron metal, moving on to tin foil, then steel bottle caps, finally moving into some variation of specifically detecting various coins, gold rings, and possibly other precious metals.

However, a great deal of older detectors will simply include a dial which, while still signaling for the metals, will show the user what metal a target may be. Moreover, even older metal detectors might simply come with a dial which is associated with numbers that signify the strength of the signal detected. This number can then be associated with general signal strengths of various objects and types of metal.

Having the right tools to dig with makes a HUGE difference when Metal Detecting. Digging items quickly allows you to work more ground. I recommend three tools:

How Does Metal Detector Discrimination Work?

VLF metal detectors work by sending a constant alternating current through a coil which, due to the polarity being reversed thousands of times per second, creates a transmit frequency that is sent into the ground. If this transmit signal encounters metal, a signal which is opposite in polarity to the transmit coil is produced within the object. These currents are known as eddy currents and are a natural response to a metallic object encountering a magnetic field.

DISC works through the same process by which normal metal detection does. The eddy currents produced within the object are first detected by a second coil. These signals are then processed and then amplified to create the sound which lets you know metal has been detected. DISC simply intervenes during the processing of these signals and tells the alert device on the metal detector to ignore certain frequencies or prioritize others.

What is the Difference Between Metal Detector Discrimination and Sensitivity?

While DISC deals with processing signals to determine an objects metallic composition, metal detector sensitivity is simply changing how strong (or rather weak) a signal your metal detector will accept. This means that by increasing your metal detectors sensitivity you may be able to detect objects which are non-ferrous metallic or simply deeper in the ground. While this can be used, in some degree, to exclude certain types of metal it is nowhere near as comprehensive or easy to use as the DISC function. It is for this reason that the two functions are seperate and are deemed to have separate purposes.

Example of How to use Metal Detector Discrimination / Sensitivity: Garrett ACE 400

The custom function allows a user to create their own desired profile for sensitivity and DISC.

If you’d like to read the actual OWNERS MANUAL for the Garrett 400 that goes into detail for setting the Discrimination and other settings select the button below for a FREE DOWNLOAD. PDF Courtesy of Garrett Metal Detectors

Click HERE to get Garrett 400 Owners Manual to understand the settings.

The Zero mode will allow all types of metals. Essentially, discriminating against zero of them.
This will allow you to choose between 8 different sensitivity levels.

This will affect the depth which the metal detector will be able to reach although this will not be shown on the depth scale. This depth scale is only used for showing the depth of objects detected in real-time.
This will allow you to move markers upon a list of various types of metals/objects. To either discriminate against or discriminate for a desired object/metal, press the button below the discrimination dial.

The constant discrimination feature which shows the composition of targets in real-time will still be active, however, discriminated against object shouldn’t elicit an audible response from the metal detector.

The Discrimination Chart of a Garrett ACE 400

Different hunting locations will have different kinds and compositions of soil. In some cases, you will encounter soil which is rich with ferrous minerals that generate eddy currents of their own when affected by a metal detectors signal. While it is unlikely that these signals will be strong enough to elicit an audible response from your metal detector, their effects are not undetected. These signals from the minerals in the soil can overload a metal detectors RX coil with useless target allocation even if a real target is in range of the coil’s detection field.

However, to eliminate these signals from your detection array you simply need to discriminate against Iron signals altogether. Most targets of value will not be affected as Iron is a low value non-precious construction material. In highly mineralized soil, Iron discrimination won’t be perfect but will be undoubtedly useful for finding targets and elimination phantom hits.

I’m always getting asked what equipment I use. I’ve been recommending the same solid metal detecting equipment for years.

2. Depth can Affect the Discrimination ID of an Object

Moreover, if a DISC ID is not incorrectly reported there is still an issue of signal reliability. A weak signal such as this can cause a very low tone, which is both difficult to locate and hone in on, to be produced. In some cases, the signal will not even be reported, this is another common source of phantom hits.

For a similar reason to why depth can affect DISC ID, the size of an object will also change DISC ID. Essentially, the larger an object is the greater the signal from internal eddy currents will be. The stronger a signal is the easier it is for your metal detectors DISC circuit to determine metallic composition.

So, it would stand to reason that a smaller target, coupled with low sensitivity, could create a very weak signal. The weak signal a small object produces is no different than a very deep object and therefor will have similar characteristics. This means that the object could have: an incorrectly reported DISC ID, a low and unreliable tone, or even an inability to be detected.

4. Oxidation can Cause Discrimination ID to Change

The only metal which is unaffected by surface oxidation is gold and various gold-alloys. Everything else is prone to an unavoidable, and inevitable, oxidation. Oxidation, more commonly known as rusting, happens when a reactive element is exposed to oxygen. In this case it is the production of a myriad of metallic-oxides which we are concerned with.

Metallic-oxides which are produced from corroding objects will bleed into the surrounding soil when moisture is present. This is more commonly known as the halo-effect. It is referred to as the halo effect because a targets field of detection will increase in a radiating pattern around the object.

If the soil which you are hunting in is moist, then the halo-effect can be your best friend. Allowing you to easily find smaller and deeper targets which have had their detection fields increased. However, these metallic-oxides will produce different DISC ID’s which might be discriminated against if you are excluding Iron or even Tin.

The difference in the strengths of these two signals affects DISC ID in a similar way as both depth and size previously have. If the coin is positioned perpendicular to the coil: the DISC ID could be incorrectly reported, a low and unreliable signal can be detected, and in some cases an object will be completely unable to be detected.

Should Beginner’s use Metal Detector Discrimination?

The answer to this question will depend upon the objective of the user. Many beginners may find it useful to gain experience from finding various pop can pull-tabs, nails, and other low value high presence objects. Finding these objects can teach a beginner how to use the pinpointer function of a metal detector and how to properly dig for an object. It is in this case that is in fact useful to not use any form of metal DISC.

If you are a beginner but you don’t care much for gaining experience, and instead favor finding only valuable targets, DISC can be incredibly valuable. Without the experience and know-how of an advanced user, a beginner can relatively easily find coins, rings, and other valuable objects. All of this while not being bogged down by constantly finding junk.

In either case, to ensure the value of your choice to, or to not, discriminate for or against certain metals, it is important to become familiar with both the discrimination and sensitivity settings of your specific metal detector. The guide provided above, for the Garrett ACE 400, will give you the basics that are translatable to most any modern metal detector. That is to say, “the basics” only. Other metal detectors can, and probably will, have different features, functions. And controls. Learning how to effectively use these things is essential to proper DISC utilization.

If You Want to Learn More About Your Metal Detector, Check Out These Articles