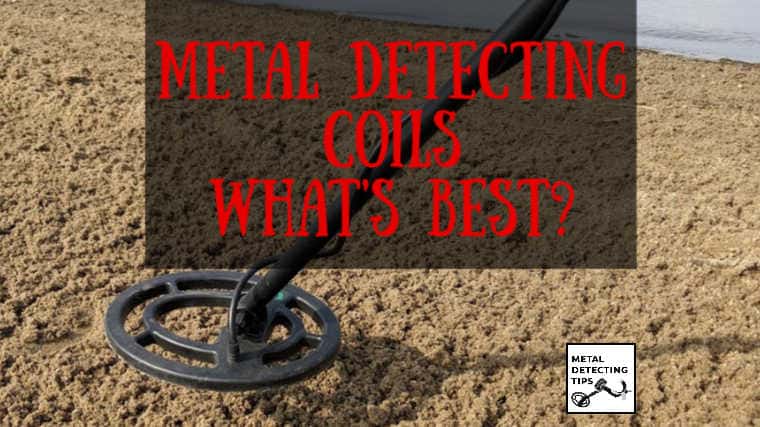 When I first started metal detecting I thought that I just needed to get an expensive metal detector to get better. However, after doing some research I’ve realized that using the correct coil can be just as important as having a good quality metal detector.

Metal detectors operate by sending an electrical current through a coiled copper wire to generate a magnetic field (this coil is called the transmit or TX coil). When this magnetic field encounters metal it induces an equal opposing current which is sampled by the receive or RX coil.

What are the Different Types of Metal Detector Coils?

At a basic level every commercially sold metal detector either works through pulse induction or very low frequency technology.

Pulse induction detects metal through repeatedly allowing a high amperage electric current to pass through a low resistance coil for a very short period of time. This action creates a magnetic field to quickly be created and then quickly collapsed. When the magnetic field collapses it creates a voltage spike which is both high in intensity and opposite in polarity to the original pulse. The receive coil (which is often the same coil as the transmit coil in pulse induction coils) then measures the energy of the pulse at the point where it decays to zero.

When the magnetic field does encounter a target some of the energy of the field will be stored within the object. This will cause the reflected pulse to have less energy and in turn take longer to decay to zero. The reason why having less energy causes the pulse to take longer to decay to zero is that the energy is being transferred through electromagnetic waves. When energy is taken from the wavelength it becomes longer, or rather less frequent, and therefore slower.

Up to the point where the reflected pulse is measured, the signal being sampled, which is collected from the RX coil, contains only the signal from the TX coil which has been reduced in voltage by a resistor as to not overload it. When the reflected pulse is also present the signal being sent from the RX to the sampling circuit is changed. The signal which is sampled is then averaged to create a reference voltage which eventually becomes the voltage of the DC current powering the alert system. A higher voltage will result in a higher volume, or a higher pitch, or even a higher frequency of clicks.

The Rx coil is arranged in a way, relative to the TX coil, that causes energy from the magnetic field of the TX coil to not affect the amount of net energy within the RX coil. This means that if a magnetic field was created by eddy currents within a conductive object then that would be the only force acting upon the RX coil. If any current is present then, in the RX coil, it will be sampled and converted to a DC current which powers an alert device. The greater the current in the RX coil the greater the current going to the alert device. This causes it to increase in volume, change pitch, or even increase in frequency of clicks (Much like a pulse inducing metal detector).

Discrimination between types of metal and determination of depth is possible with very low frequency coils. This is because each metal exabits its own unique response to magnetic fields and have varying levels of conductivity. Additionally, because the time between induction and sampling will increase over distance. Ultimately, this data is all processed and then categorized by a mini-processor within the metal detector that has been programmed with a common constant value for these occurrences.

What are the Different Metal Detector Coil Designs?

Although all metal detector coils operate on either pulse induction or very low frequency technologies their design can be manipulated in a few ways. Manipulation of these designs can create detectors which are further specialized for specific use cases. These use cases, which a coil can be optimized to detect, include: depth, mineralization level of soil, amount of area being detected, and number of targets within a given area. The most common modifications are size and shape changes of the coil.

The size of a metal detector coil, no matter the shape, will determine the depth and width of a resulting magnetic field. The larger the coil the greater each of these factors will be. However, that does not always mean that larger is better. In areas where there is a large amount of metal debris a smaller coil will give you greater ability to avoid timewasting targets and instead focus in on potential good targets. In areas where there is a large amount of space, and a small number of targets, a larger coil can increase your efficiency and effective search area both horizontally and vertically.

Shape manipulations of the search coils can also affect performance, although usually with a more specific application in mind than when considering size manipulations. There are five shapes which are available on the consumer market today each of which can be “the best choice” depending upon the scenario.

A Monoloop or mono coil is characterized by having just one coil for both TX and RX coil applications. Mono coils are only available, and possible, with pulse induction technology. Because of this, mono coils will give you the most sensitive detection and will not be affected by soil mineralization. However, this also means that with a mono coil there won’t be any discrimination of the targets and so you will have to be ready to dig up a lot of pop can tabs.

Concentric coils operate in a similar manner to the Monoloop coil with the major difference being that the TX and RX coils are separate. Due to this separation, concentric coils can be manufactured to work with either pulse induction or very low frequency technologies.

The advantage of having a concentric design is that the two coils have the largest amount of circumference possible which in turn provides the most sensitive magnetic field possible. While pulse induction concentric coils will not be affected by soil mineralization, very low frequency concentric coils will. In fact, they will suffer more than any other coil design.

Double D coils are formed by the TX and RX coils being placed next to each other in the shape of two opposing capitol letter D’s. The affect this has upon the magnetic field is that the positive detection Is only directly below the intersection of the two coils. The remaining portions of the coils produce equal field which cancel each other out.

The result of this is that the coil will be less sensitive but will also be more useful on mineralized ground. DD coils can be produced with either pulse induction or very low frequency technologies although they are much more popular in the very low frequency variant. The scenario where this coil is perfect is one in which the soil is heavily mineralized but discrimination capabilities can’t be sacrificed.

Perhaps the rarest coil design on the market today (only available from Garrett’s GTI series), imaging coils are an interesting improvement on the concentric coil design. The improvement being the addition of a second RX coil within the concentric design. This second coil allows the detector to pull from a greater range of information about a possible target to hopefully allow you to distinguish between something that is worth your time and something that is not.

2-Box Coils are similar to concentric coils in that the TX and RX coils are separate, but, the similarities pretty much end there. 2-Box coils implement a configuration in which the TX coil is placed a few feet away from the Rx coil, both being at each end of the metal detector. This configuration is only used when attempting to detect a very large amount of ground and is only manageable due to the complete separation of the coils. In areas where there is any metal debris this design will suffer. Moreover, this design is undoubtedly the least sensitive coil shape.

What is the best Metal Detector Coil for Underwater Detecting?

First off… make sure to purchase a metal detector which is designed with all of the waterproofing necessary to be used underwater. If you’re not sure if your metal detector is waterproof the information should be listed on the manufacturer’s website.

Something which is important to consider here is what type of water you will be detecting in. There is a big difference between salt water and freshwater metal detecting. In salt water you either have to use a pulse induction coil or a very low frequency coil with a salt water mode. Pulse induction coils are the most sensitive in saltwater and therefore often preferred. But, many manufacturers are coming out with very low frequency saltwater detectors to accommodate those who desire metal discrimination features.