Metal Detecting on the Outer Banks (Maps, Laws and MORE) 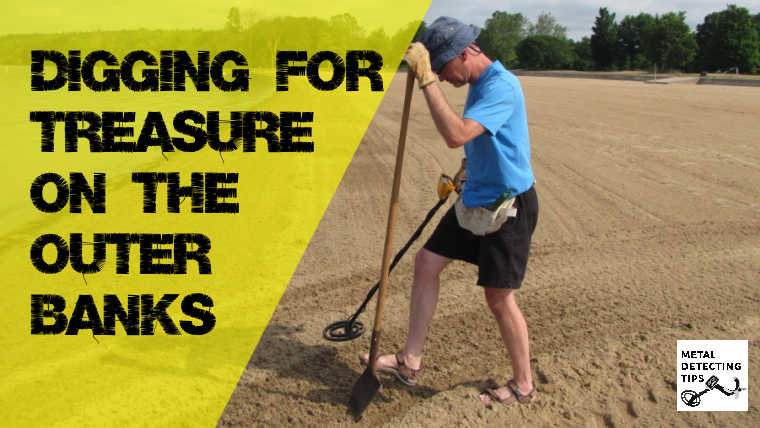 When we take a family vacation to the Outer Banks, our favorite restaurant is pirate-themed. We converse with pirate mannequins as we wait for our table and eat in pirate hats. Of course pirates and treasure go hand in hand. North Carolina beaches are known for interesting things washing up and exposing themselves. Of course Metal Detecting is a planned activity in our household, a trip to the beach would be incomplete without getting our detectors out and swing for treasure.

During the heyday of American piracy and rumrunning, the Outer Banks (OBX) was equal parts treacherous and profitable for anyone who braved the hazardous offshore shoals. Naturally, this leads us to a favorite vacation activity: treasure hunting!

While your chances of unearthing the shipwrecked booty of a lost pirate ship are slim, your chances of salvaging coins, watches, jewelry and other more-recently “buried” treasure are fairly good if you go metal detecting at the Outer Banks. So, bring your metal detector, your sunscreen and some useful information about the laws and locations for metal detecting, and you’ll be sure to have a great time.

Can You Metal Detect on the Outer Banks?

Where to Metal Detect on the Outer Banks?

With pale, silky, sand and tranquil sea grasses, dramatic dunes and moody clouds, you can’t go wrong metal detecting anywhere on the Outer Banks. The scenery alone will make any excursion worthwhile, whether or not you unearth any treasure.

Based on the assumption that most of us are unlikely to discover a Spanish galleon or Colonial silverware (neither of which would we be allowed to keep anyway), the treasures we’re detecting for are more mundane and more modern things like coins, keys, jewelry and the like. Given that, the best places for metal detecting at OBX (like any beach) are the high-traffic areas where visitors easily drop objects that they’re either unaware of losing or unable to find in the sand.

One popular spot is Carova Beach Park and Boat Ramp.

Do You Need a Permit to Metal Detect the Outer Banks?

The good news about metal detecting in North Carolina is that no permit is required as long as you’re at one of the OBX beaches (listed above) where metal detecting is allowed, saving you the time and effort of a permitting process.

The only exception to this is in state parks. You’ll recall, metal detecting is prohibited in State Parks. However, if you lose a personal item in a state park, you can apply for a permit to use your metal detector to search for your lost property. Be advised, you’ll be accompanied by a park employee while you search.

Metal detecting is also allowed on private property in North Carolina without a permit provided you have permission from the property owner.

Laws and Rules for Metal Detecting the Outer Banks, NC

Even at beaches where metal detecting is permitted, there may be certain guidelines to follow. Most recreation areas prohibit the use of metal detectors during June, July and August when crowding on the beaches is intense. (Both the crowds and the heat make this an unpleasant time for metal detecting, anyway, so you’re not missing out on anything.)

General beach guidelines request that all beach users – whether metal detectorists or families building sand castles – fill in any holes they dig in the sand. So, if your scanner leads you to start digging, fill in the hole once you’re done. Additional rules governing beach usage also apply, such as prohibitions on glass containers and alcohol (except for beer) and driving on the beach.

Should you be lucky enough to find an artifact from a real shipwreck or other item of historical value, there are additional regulations to be aware of. The laws that could affect you during your metal detecting at the Outer Banks are the Archaeological Resources Preservation Act (ARPA) and the National Historic Preservation Act. Essentially, anything you find that appears to be a historical artifact needs to be reported, not pocketed – or risk a $5,000.00 fine. Additionally, if the object you discover appears to be over 100 years old, you’re supposed to leave it where it is and report it. This allows professionals to remove it, avoiding damage to fragile objects with potential historic significance.

If you’re new to metal detecting, there are many online forums and chat boards where you can ask your own questions and dig for information specific to the Outer Banks. There are also local metal detecting clubs where you can get insider tips from experts. Some clubs in North Carolina include:

If you need to purchase metal detecting equipment, you better bring it with you or stop on the way because there are no metal detector stores at the Outer Banks. The closest stores are: