Can I Metal Detect at Virginia Beach (A Complete Guide) 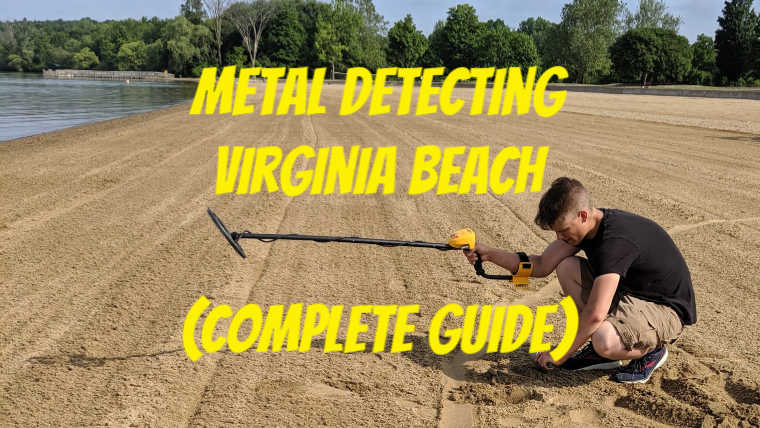 Given that the city of Virginia Beach holds the Guinness Book of World Records record for the longest pleasure beach in the United States, it is natural to assume that this city would be a huge destination for detectorists who are looking for places to vacation. While the city of Virginia Beach as a whole has plenty of great places to go metal detecting, the name of the city gives a clue of where the truly wonderful locations really are. The ocean beaches of Virginia Bay, where the Chesapeake Bay meets the Atlantic, offer scenery that is unique and metal detecting opportunities that are even more rare.

So… Is It Legal to Metal Detect at Virginia Beach?

While the State Parks, Battle Grounds, and other DNR Lands located in Virginia Beach all have some regulations when it comes to metal detecting; as it stands currently, the public beaches of Virginia Beach are free for detectorists to use unimpeded. However, always check with the local authorities prior.

Warning: If your metal detector isn’t completely waterproof you might not want to scan beaches. When a metal detector manufacturers WATERPROOFS a unit it has been designed to keep SAND, SALT WATER and MOISTURE out. Don’t ruin your machine get a waterproof unit – I highly recommend the: Garrett AT MAX link to Kellyco

Why Should you Metal Detect at Virginia Beach?

Despite the state of Virginia being one of the most difficult places to find locations where you are able to go metal detecting, there are still plenty of detectorists many of which are some of the most experienced in the nation. Virginia Beach in particular is very popular with both local and tourist detectors.

Within the detectorist community, Virginia Beach is known mostly for the miles of beautiful ocean-front beaches that thousands of people visit every day. Due to the size, and the popularity, of these beaches they are prime locations for coin hunting. Every once in a while, you may even find a ring, or some other piece of jewelry.

Besides the wonderful time you would have metal detecting in Virginia Beach your stay, if you are traveling for a vacation, will also be top notch. There are hundreds of hotels and restaurants which are conveniently located close to in beaches. Moreover, the historical sites in the area are some of the best in the country as Cape Henry (the location of a famous Virginia Beach lighthouse) is actually the location of the first landing of the English colonist who eventually settled in Jamestown.

A couple tools are a must for beach metal detecting. A waterproof proven pin-pointer and a strong sand scoop. I highly recommend the GARRETT AT PRO POINTER and the CKG SAND SCOOP (link to Kellyco to check prices and ratings)

There are no specific laws regarding digging, although many beaches prefer only surface detecting and may ask you to comply as such. In general, respect for the land, the people, and the beach itself will get you a trouble-free experience. You can read even more at the City of Virginia Beach Website – Beach Rules VBgov.com

For Virginia Beach, and most other public beaches in the city, there are also some additional rules which all visitors should be aware of such as that there should be no…

The public is permitted to search in some designated areas of Virginia’s State Parks, and in these areas, there is usually no trouble when it comes to actually going out and detecting. However, many State Parks in Virginia don’t allow detecting whatsoever, and many also don’t allow detecting in certain areas. Many of these restrictions stem from the fact that Virginia is home to a bounty of historical artifacts which come from the many battles fought there during the civil war.

The restricted areas of Virginia’s State parks are usually well marked with plenty of signage, so don’t worry too much about that. The only thing which you really need to know about metal detecting on battle grounds and other historical sites is that it is completely prohibited without a special use permit. And even after one acquires a permit, artifacts cannot be removed from the location for any reason. Instead, you need to report the artifacts to the appropriate Field Office of the Bureau.

Who to Contact for Questions about Metal Detecting in Virginia Beach?

The City of Virginia Beach

To acquire a Special Use Permit for State Parks, fill out this form…

When is the Best Time to Metal Detect at Virginia Beach?

In terms of time of year, there is never really one best time to go. In the spring you may get more hits because there has been less time for people to find everything already. However, as the spring time turns into the summer time, more people will be visiting the beach so you will have a better chance of finding stuff that has been dropped. I will say though; the fall is not a good time to go as less and less people are coming to visit the beaches and most everything has already been found by the dozens of detectorists that can be found on Virginia Beach every day.

Unlike time of year, the time of day that you go out searching can be chosen to your advantage. Some people like to go out at night once things have cooled down, and most anyone who could have dropped something in the sand during the day already has. This is a good time to go detecting because you will have first dibs on anything that was dropped during the day, however you have to be careful because they do rake the sand sometime in between 3am – 6am.

That’s not to say that there aren’t other good times to go metal detecting on Virginia Beach. For a similar reason to why many detectorists enjoy going at night, another faction of detectorist enjoys searching early in the morning. In both cases the sun won’t be too warm and the sand won’t be too hot. And most Importantly, the beaches won’t be too crowded.

I’m always getting asked what equipment I use. I’ve been recommending the same solid metal detecting equipment for years.

What are the Best Places to Metal Detect at Virginia Beach?

The best way to do this on any beach, or in any area to some degree, is to look for the most trafficked areas. Assuming that you are looking for mostly coins and jewelry which could have been dropped by other beach goers, you will have the highest chance of finding what you are looking for if you go to where it is most likely that these things would be located.
The opening of a beach area, and a triangle which gets wider as it reaches the water, is one of the most likely areas.

This logic can, and should, be used in conjunction with the logic of the previous area I recommended to ensure the maximum chance of finding stuff which is valuable, and therefore worth your time. Stuff like rings, necklaces, bracelets, and even some coins. But, of course, other places can be good as well. In the end, it’s all up to chance, and these methods are just a way of improving your chances.

As I mentioned previously, it is a bit more difficult to metal detect in Virginia’s State Parks then it is to metal detect on its public beaches. Because of this, many detectorists don’t even bother going through the effort of searching to find the designated areas where the public can search, and even less go through the trouble to obtain a Special Use Permit for those areas where the public are not allowed to search.

Despite the difficulty, this actually makes Virginia’s State Parks some of the best places to search in Virginia. These preservations, battle fields or not, are the sites of some of the most important historical events in our country’s history. The fact that not many people go through the hassle of finding a place where they can search just means that there is a higher likelihood that you will find something if you do go through the trouble.

Why Metal Detecting at Virginia Beach is a Great Idea

Metal Detecting on any of the Beaches in Virginia Beach is a great experience for any detectorist or aspiring metal detector enthusiast. The Ocean is beautiful, the sand is clean, and the shore goes on for miles. Thousands of people visit these beaches every day and leave behind hundreds of pieces of jewelry a year (on accident but hey… better for you to have it than for it to be lost forever). Furthermore, your experience in the city itself will be amazing due to their heavy focus on tourism and the preservation of historical and cultural heritage.

Out of the many possible Metal Detecting vacation locations, Virginia Beach is one of my personal favorites. You can spend an entire day out in the sand searching and still have miles of shore to cover the next day. It truly is a detectorists dream, especially if it doesn’t get too hot. But, if it ever does, you can always take a quick dip in the ocean to cool down.

If your looking for more Metal Detecting Articles Check Out Below