How Deep Can Your Metal Detector Detect? 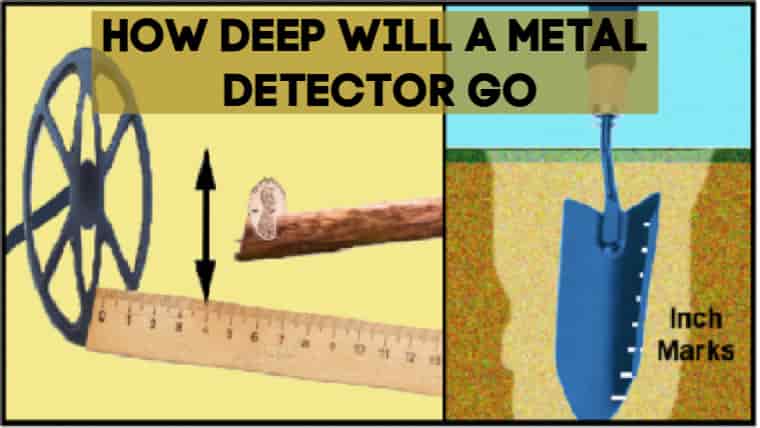 Yep, most of metal detecting enthusiasts have heard this question dozens of times.
There are at least three different ways to answer it:

The quick, answer to How Deep can a Metal Detector Detect?

The very easiest of answers is that the depth is about 80% to 100% of the diameter of the round coil you are using, or a little deeper for a D-D coil.

A slightly better estimate comes from reports of experienced dirt fishers. As a member of the Sacramento Valley Detecting Buffs, hunting with them about every weekend for several years, I’ve come up with rough estimate of coin retrievals and depths as summarized in Table 1.

We usually detected for about 3 hours, from 9:00 AM until about Noon. Then we’d lay out our coins and jewelry in front of each other and compare notes. A typical day would have twenty or so members, each displaying between a dozen and three dozen finds, mostly coins.

Experienced dirt-fishers with high-end detectors would generally have the highest counts, and beginners with $100 detectors would have the lowest. Similarly, the depths are deepest with the more advanced detectors. They would typically find money as deep as 9-inches. Although the expensive detectors can scan deeper, they still find treasure mostly in the top few inches of the soil. This is in California, after all, which is a relatively young state, so coins have not accumulated as much as in eastern states.

Now, don’t go ballistic with this table. Conditions vary widely across the United States, by the experience of the dirt fisher, and by the equipment used, among other factors.

The Technical, Journeyman Response to How Deep do Metal Detectors Detect

For the thinking hobbyist the question of how deep you can find coins requires a more detailed look at the factors that affect performance. Some of these factors, like detector engineering, are beyond our control. Others may have fixes or work-arounds. All of them contribute to your understanding of the science of metal detecting, and that, in the end, serves to make you a better coin-shooter.

The upper limit of the search field of a detector is based on the strength of the radio frequency (RF) signal generated in the circuitry and the quality of the components, including the signal processing software. Manufacturers are constantly trying to balance the cost of the unit with consumer demanded features. This is why the higher priced detectors often work better. Generally, this is a fixed factor, except for your ability buy the next higher priced machine.

Like the circuitry, the power supply is built in: you cannot change it. To work best you can keep the batteries fresh and recharged. Some detector models now have the option of a separate power pack that keeps the supply voltage at an optimum level for a longer period of time.

A larger coil size will penetrate deeper into the earth. Double-D, or D-D coils are better for deeper detecting. Many detectors models offer the ability to switch coils.

Pulse-Induction Detectors are superior in mineralized and salty environments. They are favored for beach detecting and even into the surf.
The only drawback of these detectors is that they are often poor at target identification. See: https://electronics.howstuffworks.com/gadgets/other-gadgets/metal-detector4.htm

The Two-Box Metal Detector is used to find very deep treasure. Think pirate trunks filled with gems and bullion buried on an island in the Pacific. Although they penetrate deep into the ground, they are not suited for small coin hunting. They are generally heavy and quite large.

These detectors are best employed when a treasure hunter has an approximate location to hunt in where a cache is known to exist (very rare). Normally two-box detectors would be far beyond the range of the hobbyist coin-shooter, but now some famous brands have stepped into the arena with specialized and add-on units for the hobbyist.

Certain minerals, especially salts, often interfere with the coil signal and will decrease effective depth. Water in salty terrain can create ionized particles which block the signal. Many minerals and ores, such as at quarries and in desert landscapes can create false readings and faulty target identification.

Be sure to adjust your ground balance in these areas. Many detectors compensate for mineralized soil by decreasing the signal strength or sensitivity, which in turn reduces the effective depth of your searching.

Buried power lines, overhead power lines, and large utility transformers often muddle or even incapacitate your detector functions. Interference from other coin-shooters will do the same. Operating near a radio station will sometimes cause problems.

Metal detectors work by sending a radio signal through a coil. The electromagnetic field generated by the coil is transmitted into the ground. A metal object in the ground acts like a tiny radio antenna. Energy from the coil signal generates a minute current in the target, and the coil picks up that return signal, processes it, and tries to identify the target.
(Reference: https://www.minelab.com/knowledge-base/getting-started/how-metal-detectors-work.)

The return signal from the target is not very strong. It’s strength diminishes with distance, which is another way of saying depth. Any interference from other objects or ingredients in the soil will contaminate that return signal. This process works against both the ability to detect a coin and the ability to identify it.

The best orientation for maximum depth is horizontal to the land surface, and parallel to the surface of the coil. This position captures the most energy from the coil. Likewise, a larger coin, or larger metal object, will have a better response. A coin in the horizontal position receives the least energy and is most difficult to detect. See Figure 2.

Figure 2. Return signal from the target to the receiving coil at different angles of orientation: A, parallel; B; askew at 30 degrees, C; on end.

If the target is a good conductor, such as copper or silver, the return signal will be strongest. Cheap, impure, and corroded metals will return a weaker response.

Other metal objects near the coin, salts and ionizing chemicals, even ferrous rocks, will hinder the detection of the return signal. The most common culprits are nails, bottle caps, pull-tabs and metal garbage.

Keep the coil close to the ground for maximum depth. It’s not a good idea to actually touch the dirt, as this will quickly sand-paper away the protective cover. Touching the grass is not as abrasive.

Use the pin-pointer feature on your detector if you have one. When you find a target, scan it again facing a different direction. For example, change a north-south scan to an east-west scan. Changes in the signal may indicate an oblong or tubular target.

There’s very common saying in the detecting world. “RTFM!” It means Read the Manual. Not exactly sure what the ‘F’ stands for. (Wink!)

You have to know how to adjust the gain, the discrimination level, the notch filters, ground balance and related controls. This is one of the biggest factors in getting maximum depth out of your detecting. Not knowing, or not caring about these settings is the most common error among detectorists, and it’s the most easily corrected with just a little tinkering with your controls. The solution, again, is to read your user manual.

Detector depth is also related to your chosen goals. Relic hunting, or settings for “All Metal” mode with cranked up gain will get you pretty deep. Gold prospecting, with a higher radio frequency and a small coil will get you only a few inches deep. And there’s a vast range in between.

The Personal, Definitive Answer to Depth

In order to determine exactly how deep ANY metal detector can operate you would have to calculate each of the above listed factors, measure the percentage of loss by each of the variables, then multiply those losses by the ideal air-test depth measurement.

That, of course is impractical, if not impossible, for the average detectorist.
Instead, there are simple methods to determine exactly how deep YOUR metal detector operates.

When you’re in the field and you find a relatively deep coin in your Target ID, write down the target and, if your detector displays it, the depth reading.
Dig for the coin without removing it. Once you locate it with your pin-pointer, measure the actual depth. Write that depth reading down next to the depth that was recorded by the detector. Is there much of a difference?
Repeat that for different coins and depths.

Field Research With Your Metal Detector

Remember that stick with the notch in it? (Air Test, above.) Use it to measure actual depth of your finds.

Take the stick and some test coins with you on a hunt.

When you’ve found something and you have deep hole, say 9-inches, then place the stick with a coin in the notch, and bury it with the loose dirt from the hole. Then scan it with your detector and record your readings. Repeat for each test coin.

Now you can measure the depth of each test coin in more realistic conditions. You will then have depth readings from three sources: the air test, the detector depth readings, and you own physical measurements from retrieved coins.

Figure 3. Depth calculations using an air test and measures in the field.

If the test coin is a quarter and you can easily detect it in the hole with dirt in it, then raise the coil up an inch at a time until the coin is just barely detectable. Add the height of the coil to the depth of the hole.

Now you will have a measure of depth for each coin in real-world conditions.

Of course, the loose soil in the measurements will not be as compact as the original conditions, but it will be a lot more accurate than the air test.

PRO TIP: Paint inch marks on your pin-pointer, or your digging too, so you can measure the depth in the field without carrying a ruler around with you.

So there you have it. You should now be able to rattle off the answer to the depth question for three different audiences.

I leave you with some helpful references. Happy hunting!

Vince Migliore is a writer and researcher. He has written numerous magazine articles on metal detecting and three books. His latest book is “The Art and Science of Metal Detecting,” available in paperback at Amazon. Your can read more about Vince on his Biography Page