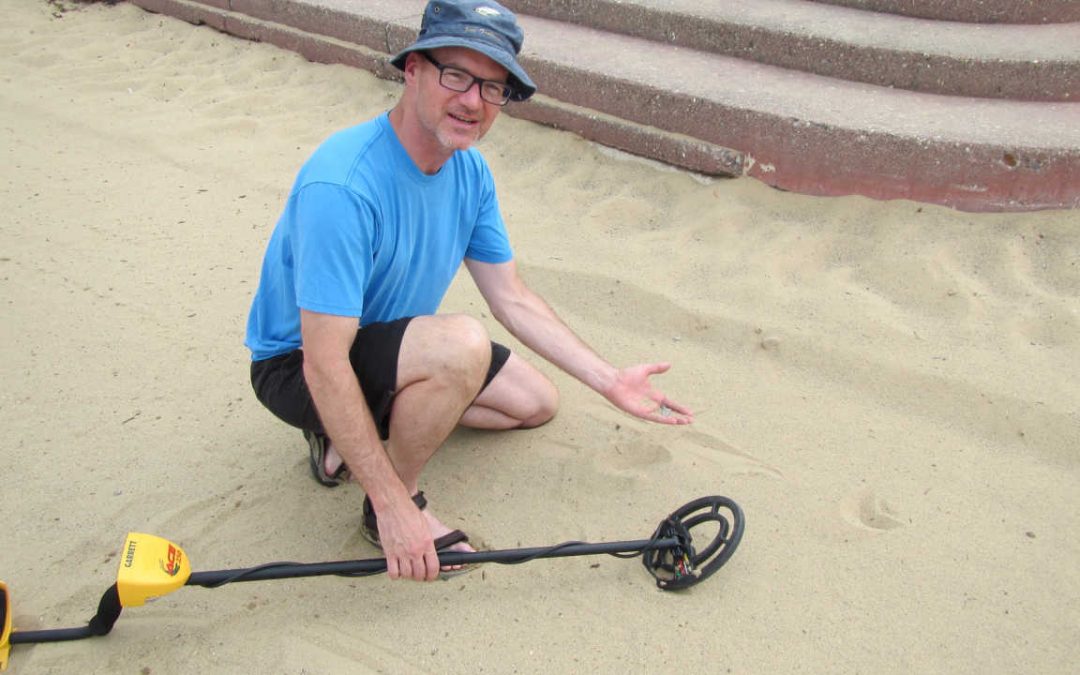 Visiting the second-largest state in the US is an exciting prospect. I was particularly committed to trying legitimate Texas barbecue, something the state is known to do very well.

One thing that struck me when planning our family trip to Texas was that for a state with seemingly strict laws for metal detectorists, there is an exceedingly high amount of treasure-seeking clubs in the state.

We’ll talk about the laws metal detectorists face and some clubs, resources, and more for the eager treasure hunter who wants to hunt in Texas for lost treasures. Before we get into these things, let’s take a look at my seven favorite places to detect metal in Texas.

Rockport Beach is a beautiful beach with a calm and tropical feel. Intended for day-use, the beach charges for parking and has facilities people can rent for parties and gatherings. The beach is a common destination to host beach weddings as well.

The Bayside Walking Path is a beautiful and scenic ¾ mile path along the beach that you can also cycle (but give pedestrians the right way).

Here’s how to find the Rockport Beach – https://goo.gl/maps/CLRYwTJtfwAz42qD9

Due to Texas strict laws, State Parks are a lost cause to get permission to metal detect. However, some cities have rules that specify precisely which parks you can use your detector with without issue. Houston is one of those cities. Houston has 17 small parks that you are permitted to use a metal detector.

Here is a list of parks that you are allowed to metal detect in, in Houston Texas:

El Jardin is about 10 minutes from downtown Seabrook, Texas. It’s a typical beach with a bit less strict rules than other beaches. For example, at El Jardin, you are allowed to bring dogs onto the beach. Dogs like to dig, so getting permission to metal detect is not a hurdle by any means. Most people don’t even bother to get approval for this beach. As long as you aren’t bothering anyone and being respectful, I would be concerned, not like the National Coastline beaches that are strictly off-limits to metal detectorists.

Here are a few of the beach’s amenities and activities:

You can find the El Jardin Beach here – https://goo.gl/maps/tQ1ZASSus5yVFTmV9

The beach on the Texas City Dike is a great place to explore and bring your metal detector. Check with officials if they’ve changed permission for detecting, but it was no issue when I went. There have been some great finds along the dike, including gold civil war buttons and coins.

The beach has a few amenities. Here are some of them:

The U.S. Army Corps of Engineers manages the Benbrook Lake area. They allow metal detecting in the developed regions that they define as being mowed and managed by the USACOE.

Benbrook Lake offers many amenities, including several campsites, swimming, fishing, and more. It’s a beautiful reservoir as well, making your stay there pretty nice. I liked the fact that I wasn’t worried about going to jail for taking out my detector.

Metal Detecting Tip: Whether you’re new to metal detecting or you have a new metal detector, it is best to practice with the detector in your yard. You can bury coins and metal objects at specific depths and places where you can test out and fine-tune your metal detector. Best of all, you’ll get comfortable with your equipment in a stable and safe location. For more great tips on detecting and more, read this article: https://metaldetectingtips.com/metal-detecting-tips/

The area boasts amenities and allowed activities like boat ramps, a swimming beach, multi-use trails, fishing, and a dump station.

The parks at Granger Lake offer a variety of things to do. Wilson H. Fox Park is not an exception. This park, also run by the USACoE, offers camping, swimming beach, fishing, a playground, bbq, and more. There are camping sites, and many offer water and electrical hookup also.

Nearby is the Pecan Grove Wildlife Area if you get tired of treasure hunting on the beach and developed areas of the park. Overall, I think I liked the parks and beaches managed by the USACoE the most in Texas. They seem the most laid back about metal detecting.

Like many other states, Texas is strict when it comes to allowing metal detectors on state lands. It is true for state lands, and it is valid for state parks. Here’s what the Texas Administrative Code, Title 31, Part 2, Chapter 59, Subchapter F, Rule §59.134 (i) “Metal detector. It is an offense for any person to operate or use a metal detector, except as authorized by permit.”

The Texas Historical Commission points out that it is prohibited to detect metal in state and federal parks in Texas. They mention that these laws respond to a looting and salvage event of a 1554 Spanish Plate Fleet.

The THC specifies that metal detecting is not restricted on state public land, which is not classified as a park. Referencing other information from the DNR, we see that as long as the land is not classified as a state forest, and as mentioned, not a park either, but still state-owned, then the use of metal detecting is permitted. However, removing artifacts is not allowed, so as long as the finds are recent items, you should be good to go to places like beaches that do not park. If it is a state park, you’ll need to get a permit. And they only allow permits for known lost items, not for hobby treasure hunting.

The state does not allow the removal of archaeological resources located on public lands without a permit. However, if the items found are non-archaeological in nature, and no plants or wildlife are disturbed, it may be permitted. Just ask the park or property management first to be specific.

Metal Detecting Tip: When you seek treasures in a particular area and don’t want to miss anything, use a sweeping pattern that is overlapping. Using an overlapping scanning technique means that each pass will cover a thin area of the pass before. This way, you reduce your chances of missing something dramatically. For more great tips, take a look at this article: https://metaldetectingtips.com/metal-detecting-tips/

2020 was a year of unrest, instability, and pandemic. So, for two men from Temple, Texas, when a long-lost treasure was found and returned at the beginning of 2021, it was a sign of good tidings.

One man, Tommy Harrison, had lost his school ring. HoweveTommy lost it 50 years ago. You can imagine his shock when someone tracked him down, that someone being David Doughty, a local metal detectorist, to let him know he had his ring from 50 years ago. Read the full story here – https://www.kcentv.com/article/news/local/lost-temple-hs-class-ring-found-50-years-later/500-070438e9-e119-41e4-8485-447a9f607ae6

Looking for more ways to learn how to metal detect? Below are some of my my most popular articles: