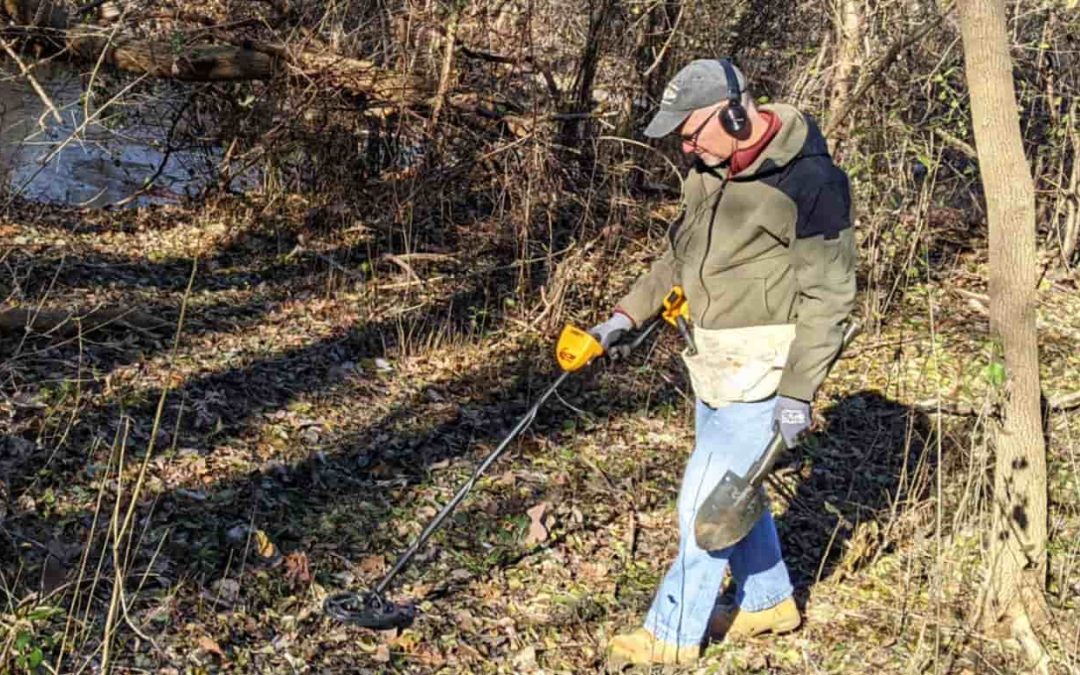 An old flat button identification is one way of finding out whether the button you found while metal detecting is antique or not. Buttons hold history, which makes them a popular item for many collectors. But with so many buttons made hundreds of years ago, what characteristics will tell you which ones hold value.

You can identify an old flat button by looking at its physical appearance. Flat buttons are often molded, which will have parting lines (molding) and a gate clip where the metal is shows signs of being poured into a mold. In addition there are old flat buttons stamped with a disc to shape them.

If you have a hobby of metal detecting, chances are you have already dug a metal button. But what is thrilling is when you find a button that is still in good shape. The reason is that such buttons will allow you to track their history and origin. For instance, if you find an old button, you are likely to search on the web to find where and when people used it.

Moreover, a person who is not knowledgeable about buttons may consider the specimen boring or useless. But as a metal detector that works on finding relics, you know how valuable old flat buttons can get. That said, you need to know how to perform a flat button identification.

How To Identify Old Flat Buttons?

Moreover, you can find flat buttons created as early as 1830. Such buttons usually have the maker’s mark or a black mark – a quality mark found in old flat buttons.

These black marks appear on the backside of the buttons, specifically around the shank. Additionally, they work as a means of promoting the manufacturer’s product.

Moreover, common marks that can help you perform an old flat button identification are:

When making old flat button identification, you can also look at their shanks to tell whether they are antique or not.

Buttons with this type of shank were popular during the 18th century. A brazed wire loop characterizes an alpha shank. The ends of the said loop meet at the base of the shank.

The omega shank featured a loop shank with the ends of the wire loop bent and flattened against the button’s back. It has a resemblance with the Greek letter omega, hence the name.

Moreover, old flat buttons with omega shanks were popular from the late 18th century to the 1850s.

This type of shank can be seen on buttons manufactured in the early 19th century. The shank has a wire inserted at the back of the button. In addition, resin secured the ends of the wire.

What Were Buttons Made of In the Past?

Performing an old flat button identification is a way of finding out how intimate and showy society once is. These buttons tell stories from hundreds of years ago. They are also a model of engineering and technology of the 18th century.

Moreover, buttons have been used for clothing for around 3,000 years. They were manufactured from wood, bones, metal, and seashells. But unlike now, they were only worn back then for decoration.

People began using buttons as fasteners in 1200. They were connected to clothes through a loop of thread. In the 16th century, people used gold, ivory, and diamond to create buttons.

On the other hand, people made buttons from the mid-1600s of ceramics, silver, and silk. They also had hand-painted designs and portraits or scenery.

People began creating different buttons and using other materials to make them as time passed.

During the late 17th century, French tailors began manufacturing thread buttons that looked like small balls of threads. These buttons were simple to make as they only use basic thread. They also became popular due to their durability. They were also comfortable enough to be pressed against the wearer’s skin.

Celluloid is a rare and first artificial plastic material used for making buttons. They come in all shapes and sizes and can be transparent, opaque, or both.

This type of button became popular in the early 1900s. However, the downside of celluloid buttons is that they are incredibly flammable.

This type of button was the first entirely synthetic plastic. They were more opaque than celluloid buttons and were also heavier.

Lucite is a material with low density but is still stronger than previous plastic materials used for button making. Old Lucite buttons were colorful and had glitters embedded in them. Some even have rhinestones mounted on their surfaces.

Additionally, Lucite buttons have different shapes, such as flowers or animals.

People from the Victorian era created black glass buttons. They made these buttons to imitate the actual jet buttons worn by Queen Victoria when she was mourning her husband’s death.

Most of these glass buttons came from Czechoslovakia during the 20th century.

Brass and copper were the common materials used for creating antique metal buttons. Gold, sterling, and pewter buttons were less common back then.

In addition, some metal buttons were popular as ornaments with patterns and pictures embossed on them.

There were also metal buttons from the revolutionary war and the civil war era. Many of these buttons feature military symbols on them. When performing an old flat button identification, you will easily identify military buttons with these features. (source)

What Are Tombac Buttons?

A tombac button is a one-piece metal button that archeologists refer to as “flat disc” buttons. It is an alloy of brass, a high amount of copper, and 5 to 20 percent zinc. Some manufacturers also added tin, arsenic, or lead to improve the color of tombac buttons.

In addition, the metal used for this type of button is inexpensive. For this reason, people often use it for ornaments and medals.

The Rise of Tombac Buttons

Tombac buttons were used as large, fashionable coat buttons. Typically, these buttons had plating, and the face was either plain or decorated with either hand-engraved or engine-carved design.

The shank of this button type consists of a copper alloy wire inserted into the mold while casting the button in a style called “cast in boss.” Manufacturers produced tombac buttons in the second half of the eighteenth century.

Additionally, most tombac buttons were cast with their backs finished on a lathe.

Moreover, people started casting tombac buttons around the 1760s until the 1800s. In the 18th century, tombac buttons came in different shapes and sizes. These variations make it easy for people to perform old flat button identification. (source)

Are Old Buttons Worth Any Money?

For this reason, the old buttons you have in your stash can be worth money.

Manufacturers created buttons using a wide range of materials back then. When performing an old flat button identification, you may even see some buttons made out of highly prized materials. For instance, some old buttons feature opals, pearls, and even black sapphires as their primary materials.

These old buttons, which date back to the 19th century, are precious and are often popular with serious button collectors.

Apart from vintage buttons made out of gems, buttons cast with metals are also popular. Most of the time, these buttons are popular with collectors because they hold history. You may even find out about these buttons’ origin and history while performing an old flat button identification.

For instance, soldiers wore old brass buttons on their military uniforms. This particular type of old button can sell for a high amount. Such is especially true of the button’s design is unique to specific military service or an important period.

Additionally, even buttons from the Depression era are items for collection. However, these buttons are not as valuable as buttons made out of gems in terms of money. Still, collectors find these buttons valuable as they hold a lot of nostalgia connected with them. (source)

Factors That Affect the Value of Old Buttons

One factor that affects the value of old buttons is their current condition. Similar to other collectible items, well-preserved buttons hold a high price.

The pedigree of antique buttons can also impact their current market value. Buttons that are identifiable or those that you can trace the origin, are likely to allure many collectors. However, it is worth noting that some collectors would ask for a great deal of documentation before agreeing to the price you are asking for old buttons.

Even some fashion designers seek old buttons as they want to add them to the overall design of their creations.

That said, you can make money out of old buttons, especially old flat buttons. However, you need to perform a thorough old flat button identification to ensure that they are antique.

What Kind of Old Buttons Are Worth the Money?

For this reason, rare and beautiful buttons are still available as items for collection.

Moreover, old flat button identification is essential for finding out which buttons are worth the money.

That said, how can you tell whether or not an old button is worth the money?

However, rare and antique buttons were not plastic buttons like bakelite or celluloid. Instead, rare buttons made from

Buttons with hand-painted designs are exceptional. The reason is that each design is one of a kind, regardless of whether or not the design is unique. Hand-painting buttons mean decorating them one by one, so no two buttons look alike.

Buttons made of metals can come from brass, steel, silver, and gold. However, the most valuable buttons consist of precious metals.

Moreover, you can find what metal a button contains by flipping it over and looking for the maker’s mark. For instance, buttons with sterling silver as their primary material will bear “Sterling” or the number “925” on the back. So, if you find buttons made with precious metals, it will be easy for you to perform an old flat button identification.

Buttons with figural designs are the ones that represent a person, mystical creature, animal, and other strong figures. For instance, you will see buttons with Art Nouveau designs featuring women with flowing hair. There are also buttons molded to look like a fruit, flower, and even pastoral scenes made in miniature.

There are rare buttons that feature small mosaics or enameled with colored glass as decoration. Such special touches make an old button unique and rare. In fact, some collectors focus on buttons that display such designs, thus making them valuable.

People carved many old buttons by hand instead of being made by machine. So, if you are performing an old flat button identification, look for subtle signs of being carved by hand on old buttons.

You will see slight variations in the depth of carving and texture or even the lack of uniformity. (source)

Performing an old flat button identification is not that difficult. The reason is that most old buttons have different shank types, which can tell you when their fabrication occurred. Many antique buttons also have black marks on their backs, identifying them as antique items.

But apart from old flat buttons, other rare buttons are considered antiques. For instance, buttons made out of non-plastic materials are considered rare, so they hold so much monetary value.