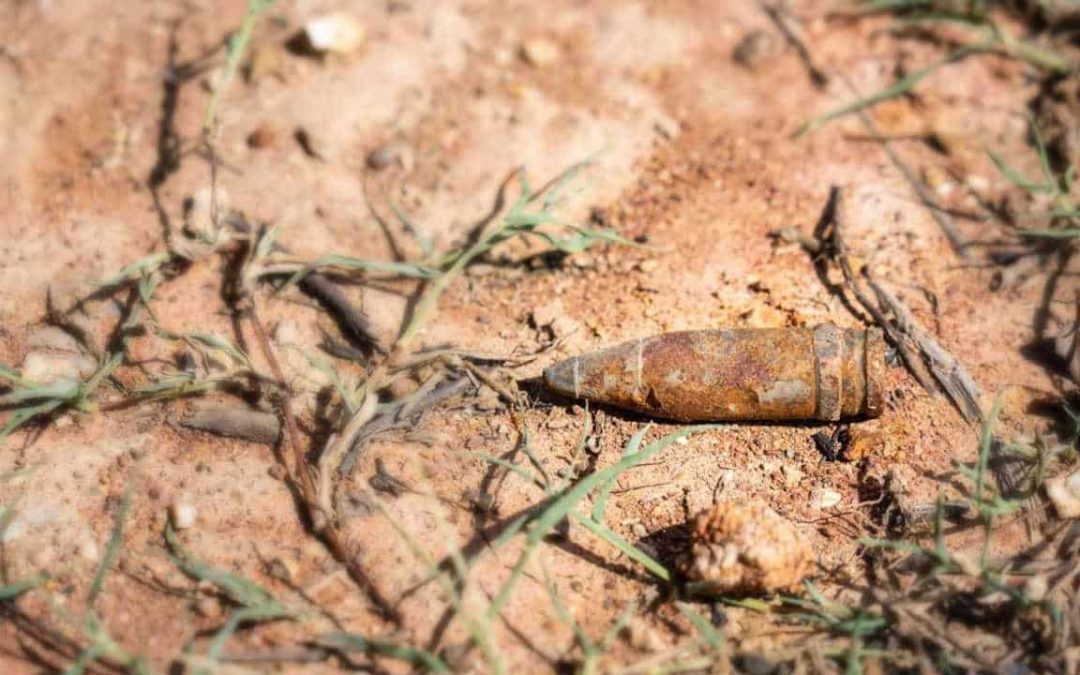 Yes, metal detectors can find bullets. Metal detectors operate by sensing changes in the electromagnetic field around a metal object.  Because bullets are made of electrically conductive materials like brass, lead and steel a metal detector will get a strong “signal” from a bullet.  Finding bullets with metal detectors is how relic hunters and police recreate past events.

The average bullet consists of metals. There are other types of bullets, like rubber bullets. However, if you consider an average shell, it’s a metallic object by definition.

Nevertheless, this article will delve into how metal detectors find bullets. You’re welcome to sit down and learn more about the science behind it all.

Let’s give an in-depth explanation as to how that all comes about.

The Composition of a Bullet

According to the National Forensic Science Technology Center, a bullet consists of the following materials:

The Different Types of Bullets

The NRA shares that there are five primary types of bullets. The bullets typically consist of the same material, but they tend to differ here and there. Nevertheless, here are the main types of bullets:

You might have come across rubber bullets and wondered if a metal detector can find one. The answer is a simple yes. Both the bullet’s core and jacket consist of metal, so a metal detector is likely to find one.

A metal detector can find any of the types of bullets mentioned above thanks to metal manufacturers use to make the bullets. Now that that’s out of the way, we can discuss the answer to this article’s central question: Can metal detectors find bullets?

Metal Detecting Tip: Without properly registering any ammunition before boarding a plane, a metal detector WILL find it.  TSA Guidelines

How Do Metal Detectors Find Bullets?

There’s a science and historical aspect to how metal detectors find bullets. You can try asking yourself how does law enforcement find missing bullets? Well, they use specialized metal detectors to find bullets in strange places like forests or grasslands.

The term specialized refers to high-quality metal detectors suited to finding bullets in criminal cases or the like.

The History of Metal Detectors

Medical treatment is a major factor in the development of finding bullets.  Just think of how many people have been shot, and treating the patient involves locating a bullet.

So, let’s go back in history – metal detector history, that is.

In 1874, a Parisian inventor, Gustave Trouvé, created a device to find bullets in patients. In 1881, Alexander Graham Bell (yes, the guy that created the telephone) refined the invention to locate a bullet embedded in President James Garfield’s back. Unfortunately, the attempt failed, and the president died from the gunshot wound.

Once people realized that maybe metal detectors were pretty helpful, they used them in World War I and II to locate land mines.

So, you can now understand that initially, inventors created metal detectors to find bullets within patients and for physicians to remove them. The theory and practical part worked, but it only gained momentum in the 50s due to increased hobbyists.

A discriminator is your metal detector’s ability to ignore unwanted signals and allowing only the wanted signals to make a sound. So, if you’re looking for a bullet, you could focus on specific metals. Bullets mainly consist of lead, so that you could choose lead as your target metal.

Another example, you can think of nails. The majority of nails consist of iron. So, if you don’t want to find iron, you can silence your metal detector whenever it passes over an iron object. You can do the same with bullets but vice versa.

Since you prioritize lead, you can silence all the other metals and let your metal detector make a sound when you’ve come across a lead object. Different bullets consist of different materials; you need to have some backstory on which type of bullet you’re looking for, what material it consists of, and the caliber that shot the bullet.

However, there might be an instance where you ‘accidentally’ find a bullet or maybe an empty shell while prospecting. The possibilities are endless, but the discrimination feature can be both your friends and your enemy.

Another great thing about the discrimination feature is that it reduces the risk of ear fatigue. Many metal detecting enthusiasts will use headphones to listen out for signals. Some metal detectors also come with a loudspeaker option while also giving users a headphone jack. The possibilities are endless with this tool.

As the name suggests, they give you signals of all metals when prospecting. They have their advantages and situations, but if you’re looking for something specific like bullets, experts recommend that you purchase a metal detector with the discrimination feature.

Here’s a table on the different levels of conductivity and sounds to different targets.

The discriminator tool may come across as a fantastic tool that will help you differentiate what you want from what you don’t want when prospecting. The unfortunate side to this assumption is that discriminators aren’t perfect.

The only way to honestly know what object or target you’re picking up is to dig it up and get it out of the ground. It’s the full proof way of getting things done the right way.

What Are the Most Common Things to Find When Metal Detecting?

From my experience, I find a lot of trash.  Bottle caps, gum wrappers and pull tabs.  In terms of finds with value – my number one is clad coins.

Metal Detecting Tip: The best way to get invited back to a private property to metal detect is to complete your search and asking the property owner where to throw out the trash you picked.

When consulting with detectorists with more experience than me, coins and jewelry are some of the most common things to find when prospecting.

Bullets aren’t as common, but there’s still a probability of finding a bullet while prospecting. Particularly when scanning battle fields or hunting camps.

What To Do When You Find Bullet While Metal Detecting?

Let’s say that you did find a bullet; what do you do with it? Well, on their own (without a firearm, that is,) bullets aren’t dangerous. The only problem comes when minors misuse them.

Not only that, but it’s challenging to set off a bullet without a firearm. The point is that the bullet will not explode if you do not involve a firearm. So what do you do with it?

There are three places you can go to dispose of ammunition:

You can take the bullet or bullets to your local hazardous waste collection point. You can put your trust in the training of the staff there. They know how to take care of hazardous waste items like bullets and cleanly get them off your hands.

On the other hand, what if you don’t have either of these options? Depending on your location, you can visit your local gun range and ask them for assistance. If none of this work, go back to the police station and request a way forward to properly get rid of the bullet.

Remember that bullets are not dangerous if they are on their own. On the other hand, when loaded into a firearm, they become a whole new object entirely.

What Not to Do If You Find Ammunition While Metal Detecting

Now that we’ve covered what to do while metal detecting and you come across a bullet, here’s what not to do in the same scenario.

Experts recommend that you should not bury the bullet. Why? Bullets consist of metals. Metals are not biodegradable materials. You can use gunpowder as fertilizer, but the rest of the bullet, the jacket, etc., are non-degradable.

Next on the list of things you shouldn’t do is throw it away in the trash. When your garbage truck comes to pick up your trash, it runs through a compactor. The compactor is capable of causing the bullet to explode, which isn’t safe for the people collecting your trash. Not only them but anyone else around the truck. Experts recommend avoiding your trash can altogether. There are other ways (mentioned above) to get rid of the ammunition.

Not only that, but you will also be throwing the uncertain bullet in the trash where it might explode when running through the compactor. It’s better to cover your bases before disposing of ammunition, and to choose to soak the bullet and throw it away isn’t a full-proof method.

It’s best to contact one or two of the places mentioned above to get assistance on how to dispose of your bullet. They in the future you’ll have the knowledge to get rid of it properly.

What We’ve Learned from Metal Detectors and Bullets

Metal detectors are capable of finding bullets because of the metal material used to make bullets. This feat is possible thanks to the original purpose of metal detectors and their current purpose.

Nothing about their mission has changed over time. Not only that but disposing of bullets is a responsible thing to do. Ensure that you take care of yourself and the people around you by disposing of the ammunition properly.

But if you find an old bullet that might be worth something, it no longer becomes trash but treasure. Ensure that you get an estimate of its value and work on whether or not you want to sell it or keep it as a token of your hard work while prospecting.

Old bullets can hold some value, so be sure to consult your local expert and get a price for your bullet. You have nothing to lose, and it can make for a great story.

Are You Interested in What Other Metal Detector Enthusiasts Are Asking? Here Are Some Extremely Helpful FAQs.

Guns are typically made of metal. So, a metal detector may be capable of finding a gun. The same applies to the majority of weapons. Most weapons consist of metals, so it’s pretty likely to find one with a metal detector.

2.   Can A Metal Detector Find a Rubber Bullet?

Rubber bullets have a metal core and sometimes a metal jacket. So, a metal detector can find them.

3.   Do Bullets Set Off Metal Detectors?